NordVPN is your secure gateway to the Internet. If you want to take control of your network and have 100% private access to the Internet, you are at the right place. Enjoy Internet freedom and security with our VPN service.
The NordVPN service allows you to connect to 5000+ remote servers in 60+ countries. It secures your Internet data with military-grade encryption, ensures that your web activity remains private and helps access content online.
NordVPN’s easy-to-use apps are compatible with Windows, macOS, Linux, Android, and iOS. If you want to encrypt only your browsing activity, NordVPN offers lightweight VPN extensions for Chrome and Firefox.
IMPORTANT
For the list of NordVPN supported routers, click here
Setting up a router with NordVPN, click here
Category: VPN Tags: Nordvpn, VPN 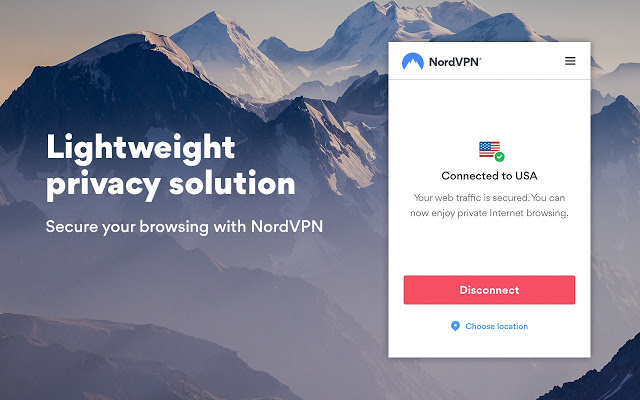 When it comes to virtual private networks, or VPNs, NordVPN has proved itself to be PC Mag’s top service for securing your online activities. The company now has more than 5,000 servers across the globe, making it the largest service we’ve yet tested. It also takes a strong stance on privacy for its customers and includes tools rarely seen in the competition. NordVPN wraps all that up in a snazzy client that’s consistent across every platform on which it’s offered, and it includes ad blocking for good measure. For its superlative user experience, numerous features, and robust service, it’s a rare 5-star PCMag Editors’ Choice winner.

I am pleasantly surprised that NordVPN did not interfere with Netflix at all in my testing. That’s great, because Netflix blocks VPNs aggressively.

Note that while Netflix does not explicitly prohibit the use of VPNs, section 6c of its terms of use does mention the use of technology to confirm your location. This document also doesn’t guarantee access to content outside of the country where you created your account. Using a VPN might not breach this agreement, but it’s clear that Netflix takes a dim view on the technology.

which serves as a VPN connection and the other as a fine-tuned ad blocker.

In my experience, the average person would rather risk having no protection than deal with frustrating security software. That’s why NordVPN succeeds: It makes using a security tool simple. It has everything we expect in a VPN and then some, with specialized servers for Tor-Over-VPN and double encryption being the service’s standout features. Continued server upgrades make it the most robust VPN service available, and ad blocking and network protection features raise NordVPN’s abilities still higher. NordVPN also has an excellent stance on user privacy, collecting very little data and operating out of the legal jurisdiction of Panama.

Taken together, these factors are more than enough to justify its comparatively high monthly cost. NordVPN is a smart choice, and it remains a PCMag Editors’ Choice

Be the first to review “Nordvpn – 3 Months Subscription” Cancel reply